When Andrew wasn't home by 4:00 p.m. on Thursday, March 24, 2016, I assumed he was taking the long route home so he would have more time on his motorcycle.  But by 4:30 I knew his life on Earth was done.  I got the call at 4:25 p.m. that he had been in a crash and I needed to get the ER immediately.  On my drive to the ER I called the people I knew and without them telling me he was dead I knew he was gone.  Then I came upon the crash site and I knew.  I saw his bike on the ground and a badly damaged car.  Then I noticed the crosswalk pole was broken in half and was lying next to his bike.  I would later learn he and the bike hit the car, then went airborne where he hit and broke the pole with his body.  When I had to go and release his bike to the insurance company, I took pictures of the damage.  As you can see, it was not good.  No way he would have survived without serious, potentially paralyzing injury. 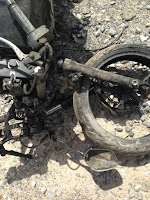 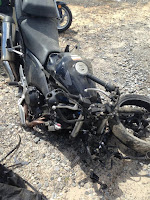 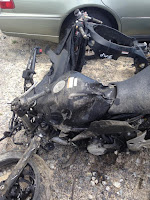 When I arrived at the hospital and was escorted to his room by his boss and public safety, where the chaplain was waiting, they brought the doctor over to me where he said something along the lines of, "Ms. Carson I am so sorry, when Andrew arrived he had no cardiac activity and we did all we could but he was already gone."  My head knew he was gone but my mother's heart needed to lay eyes on him.  So I responded with a hand slapping, fist-pumping, "Can I see my son?"

I was escorted into his room by a nurse, it was just she and I.  She talked to me softly, with great compassion.  She let me know the tube in his throat and the neck collar could not be removed by them as the medical examiner would need to remove those.  I ran my fingers through his hair, noticing all the scrapes on his face and the blood around his nose and mouth.  I asked if I could hold his hand and she gently pulled it out for me from under the sheet.  I cried soft tears while thinking "what do I do now?" and realizing he was still warm and really just appeared to be sleeping.

Friends and family started arriving but I was mostly concerned with immediate family and Natalia.  I had not yet let Natalia know that Andrew was gone.  I wasn't quite sure how to tell her.  Then there was Matthew.  I had called him on my way to the hospital but wasn't "certain" Andrew was dead then.  How do I tell him his brother is dead?  That it is just us now and our precious Andrew is gone?  I had also called my brothers and sisters when en route and my sisters were on their way and my brothers made travel plans as one is in London and the other in Los Angeles.  Then there was my dad.  Already suffering with heart problems, I had no idea how to tell him his grandson was gone.  Would that lead to a heart attack?  Then I thought of the many others I needed to call and just asked my friends who were there to start making the calls so I could stay with Andrew or talk to people as they arrived.

Recounting this is bringing tears to my eyes and heaviness to my heart at the moment, it's still pretty fresh.  I'm going to end this post here for now, but will post more about this night soon.